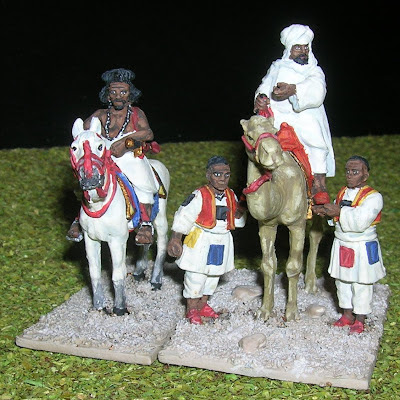 I haven't posted on here for ages but I am starting to feel that once I have the last Greeks finished for Cynoscephalae then I won't want to paint another Ancient for months. The Perries have just announced that they are about to start the Egyptian army for the Sudan so I think I will go back and finish some of the figures I have started.
I have also picked up some cavalry in the interim so will do some of those too.
In the meantime here is my army command group. The Perry figures are so nice even my dodgy painting can't spoil them.
I have ordered the new Mahdist sourcebooks from the Virtual Armchair General which should prove very useful and they have a great offer on flags as well.
http://www.thevirtualarmchairgeneral.com/
Posted by legatus hedlius at 9:21 PM