Music to paint by 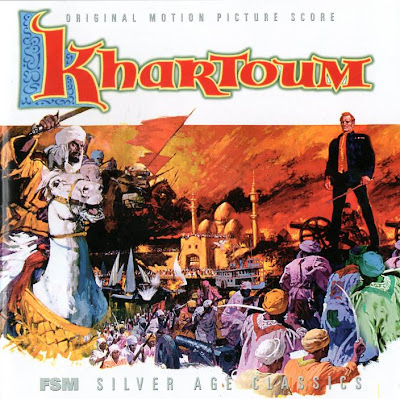 I am totally unable to paint without music and usually, when painting Sudan British happily listen to the Complete Marches of Kenneth Alford (alright Alford, real name Fredrick Joseph Ricketts, wasn't born until 1882 but it sounds right) on my computer. Whilst painting Highlanders I also have some Scottish military music but, honestly, there is only so much bagpipe music I can bear. I was very pleased, therefore, to acquire this weekend a cd of the soundtrack for the film Khartoum (1966) with music by Frank Cordell (1918-1980). The score is a mix of cod Walton and Elgar and Islamic (well, "Egyptian") sounding music. John Williams, when writing about the music for the throne room scene of Star Wars (1977) said that he wanted an English feel like Elgar. Frankly, he must have been thinking of Cordell's overture to Khartoum; the similarities are, er, remarkable. As to the "Egyptian" sound, the whole exotic "Egyptian" scale, with its flattened supertonic was invented by Verdi for Aida (it's about as authentic as Sir Walter Scott's version of Scotland) but everyone since has used it from Maurice Jarre in Lawrence of Arabia to Jerry Goldsmith in The Mummy.
Anyway it makes a change from all those wailing bagpipes (it does quote Highland Laddie)!
Posted by legatus hedlius at 10:07 PM 7 comments:

The uniform illustration by Michael Perry
The site which really helped me on this was:
http://www.angelfire.com/tx/ToySoldier/tartan.htm
I used quite dark colours: Humbrol 104 (Oxford blue -appropriately!) and 91 (black green). 104 is my generic dark blue for the likes of French Napoleonic infantry and ACW Union troops. 91 is the colur I use for Napoleonic British riflemen (I see the new Sharpe is on this Sunday). I used a slightly lighter green (Humbrol 30, Dark green) for the small squares and 81 (pale yellow) for the yellow lines. Normal Humbrol yellow (24 trainer yellow) was too bright.

I drew on the squares with a soft pencil, having used the Perry Uniform guide to get the scale of the squares on the kilt, and then painted with a 000 Windsor & Newton Series 7 sable brush. It needed quite alot of touching up and the rear of the kilt, with the pleats, was a nightmare as I tried to estimate where the patterns would fall.

Never mind, I will do some more on the next batch tomorrow morning now we have light evenings for a while. 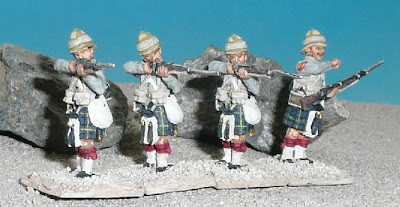 Well, I have, at last finished four Gordon Highlanders (only 18 more to do). I don't think I have ever found figures so stressful to paint but now that I have done them I do feel more relaxed about the others and have even started on the next four (I don't think that I can face more than four at a time!). The tartan looks OK (from a distance) and now that I have a technique for doing it it's not such a worry. I need to work at the hose as I used colours without enough contrast so the diagonal check doesn't show at all in the pictures. 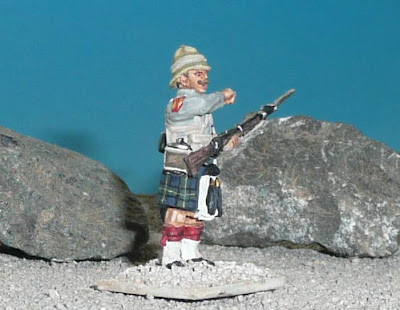 Here is the corporal; lots of character as you would expect from the Perry twins.
Posted by legatus hedlius at 7:41 AM 3 comments: 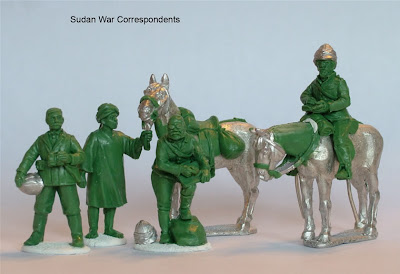 I was just looking at the on the workbench section of the Perry Miniatures site and noticed these Sudan War correspondents. An unusual choice to say the least but I will have to get them!
Apart from the horse holder I will be able to use them for the Zulu war as well.

I have been banging on for some time about the lack of British Mounted Infantry in the range. At 1/33 I would only need 4 figures to represent the 120 or so troops so maybe that's why they haven't bothered. What I have done, though, is bought a pack each of Camel Regiment and some cavalry figures and have put the camel riders on the horses. It looks pretty good and so I will paint them up when I get back from the Gulf.

The real shock is that I have started painting four Gordon Highlanders and I have actually finished the first kilt and it looks OK! In fact I am well on the way with them and hope to finish them if not this coming weekend (I don't return from Dubai until Sunday pm) then next weekend. I am so pleased and relieved I have even based up and undercoated the next four figures! They do take ages, each kilt needs six stages of painting, so I can only face four at a time!
Posted by legatus hedlius at 7:20 AM 5 comments: