The next unit I'm going to do is the Royal Marines Light Infantry. There is no disagreement on the numbers in this unit; all the sources agree on 478 which is 14 figures at 1:33.

Stuart Asquith in his recent War in the Sudan 1884-1898 describes the RMLI as being dressed in undress blue with white helmet and black or white leather equipment. I'm not convinced by this and suspect it refers back to the earlier Egyptian conflict in 1882. There is a watercolor sketch in the Victoria and Albert Museum that shows them wearing grey. Crucially, Count Gleichen in his book With the Camel Corps up the Nile, describes them as being in grey uniforms with white helmets and equipment so that is what I am going for.

Two very small illustrations I found on the net seem to confirm the grey uniform. Firstly, this illustration from the official Royal Marines website; you would assume that they would get it right. 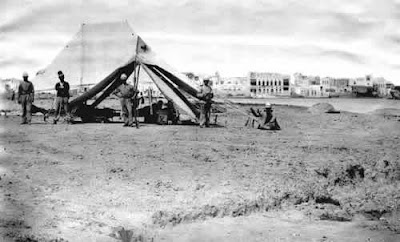 Secondly, this photograph of a number of Royal Marines outside their medical tent in Suakin in 1884. This looks like a grey not a navy blue uniform to me.

Given that they are light infantry I wanted them in rather more active poses and looking a little less regimented. They need a lot of work so I would think that it will take three weeks to get them done. Right, that's enough typing now I better get the rest undercoated!

Posted by legatus hedlius at 8:57 PM

Good reasearch - you may want to treat yourself to a trip to Portsmouth to visit the marines musuem at Eastney - being local I've been a few times and it's well worth it...

Yes, I definitely want to go down there. We have a holiday home in Cowes so use the Fishbourne ferry a lot.

RMLI may not have been in grey all the time. A Melton Prior sketch done on the spot at the battle of El Teb has the footnote:

"all units in grey Except the RMLI in blue"