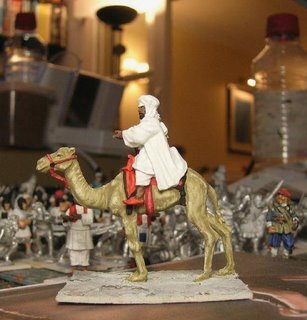 This is just a test as I am having trouble uploading photos onto this site so may have to start again.

Here is the Mahdi in progress. Having been very pleased with the camel I have just read that he had a white camel. Curses! I am not repainting him though. I'm sure he rode more than one!
Posted by legatus hedlius at 10:44 PM No comments:

Having set up a couple of blogs based on armies I meant to work on but then got distracted from I thought it might be a better idea to actually do one where I am making some progress!
I chose the Sudan campaign 1883-1885 largely because of the wonderful new range of figures sculpted by Michael Perry of Perry Miniatures http://www.perry-miniatures.com/index2.html but also because I have wanted to build an army of Colonial British in pith helmets for some time. I bought my first metal figures six or seven years ago largely because they had British in pith helmets (Foundry's darkest Africa). I didn't want to do the Zulu wars because I couldn't face painting hundreds of nearly identical Zulus. Britain's opponents in the Sudan were much more varied in appearance and the British forces themselves, including Royal Marines, Royal Navy, Highlanders and Camel mounted troops were also more interesting.

Experience is also showing that I actually get these figures painted, rather than just looking at them for months!

Another key element for me is having a really good book or two and, preferably, a film for inspiration.

I picked up Wilbur Smith's recent novel about the siege of Khartoum, Triumph of the Sun, http://www.amazon.co.uk/gp/product/0330412655/202-4106162-1167063?v=glance&n=266239&s=gateway&v=glance at Gatwick airport. I have only read a couple of Wilbur Smith novels before and this one started well but then seemed very rushed at the end but it inspired me to buy the DVD of the 1966 film, Khartoum, starring Charlton Heston http://www.amazon.co.uk/gp/product/B000089AUD/202-4106162-1167063?v=glance&n=283926&s=dvd&v=glance which, while also not perfect, is certainly well worth seeing, despite a rather eccentric portrayal of the Mahdi by Laurence Olivier. Interestingly the Perry figure looks more like Olivier playing the Mahdi than the historical figure!

I had already picked up some Perry figures at Salute 2005 but reading the book and watching the film inspired me to get some painted. I took a group of 18 Beja with me on holiday last month and, much to my surprise painted them all. With the ones I had done earlier in the year they were starting to look like the beginning of a proper army. I have just bought a more few packs from Perry to complete some more units and hope to get these painted in the next few weeks.
Posted by legatus hedlius at 2:22 PM No comments:

Labels: General, Sources
Newer Posts Home
Subscribe to: Posts (Atom)
A record of the building of British, Egyptian and Mahdist Armies from the war of 1883 to 1885 using 28mm figures.