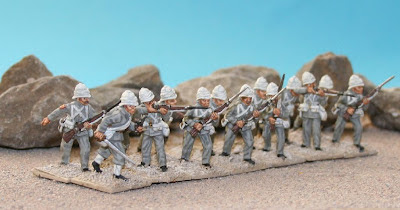 The Royal Marines, along with a force of sailors, were the first British troops landed at Suakin. The 464 men and 14 officers of the RMLI were commanded by Lt Colonel (brevet Colonel) Henry Brasnell Tuson, Royal Marine Artillery.
At El Teb the Marines formed the rear of the left hand flank of the square as it advanced, behind the York and Lancaster Regiment. As they approached and skirted the hill where the Beja were located they became the closest British to the Ansar lines. The men in the square were ordered to turn 90 degrees which put the RMLI in the front as they advanced on the dug-in Beja. The first Ansar charge of the battle caused the Yorks and Lancs, who had outdistanced the Marines as they moved forward, to fall back about 40 yards. The RMLI rushed up to close the gap and oust the Beja who had entered this gap in the formation. The Marines, along with the Naval Brigade and the Yorks and Lancs, were involved in bitter hand to hand fighting as they pushed the Beja out of their first position. The Marines had 2 officers wounded and 3 men killed.
At Tamai the RMLI formed the rear of the 2nd Brigade Square under Major General John Davis and accompanied by Graham himself. When the Black Watch charge opened up the square and the Beja flooded in, the whole British battalion was forced back onto the RMLI completely disrupting their formation. As the Second Brigade began its fighting retreat the Marines were a key element in keeping the steady discipline needed as troops from all the units in the Brigade became hopelessly intermingled. The Marines lost 3 men and 15 wounded at Tamai.
100 RMLI later served with the Guards Camel Regiment in the Desert Column but that is another Army (about 2010)!
Posted by legatus hedlius at 8:15 PM

An excellent unit, LH. The white helmets and straps work very well with the grey uniforms.

Not sure how all this blogging works so I've posted a comment on the most recent Sudan blog. Great features and pics, I too have ordered some perry sudan figures and are seeing hordes of Beja painting ahead. one question where can you get Sword and the flame rules in the Uk ? my name's mark but I can't sign in as my web access is restricted by govt filters !

I don't think anyone in the UK sells them. I got mine from Castaway Arts in Australia and they arrived very quickly.

If you want you can order it directly from the company too.

It's a fun set of rules, and I hope you enjoy them.

Thanks guys! I ordered them from Castaway, you're right great service from them....and they are a great set of rules ! I still need a few more Beja though !