New novel about the Sudan War coming out 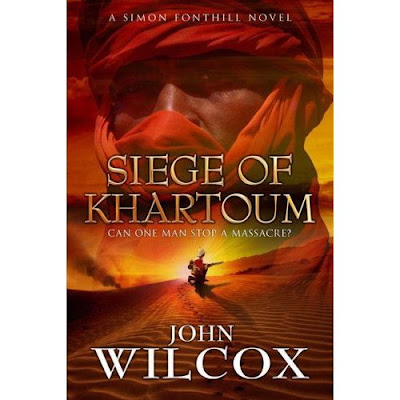 I don't like the new cover style. I preferred the older ones which featured Victorian paintings!
I enjoy John Wilcox' novels about the colonial period even if they are far from great literature (or even great historical novels) but they have certainly improved a lot since his first (really not bad anyway) novel The Horns of the Buffalo set in the Zulu war of 1879. The second (and much better) novel The Road to Kandahar took our hero, Simon Fonthill, to the North West Frontier. In the third book, The Diamond Frontier, he was participating in the bePedi war and then moved straight to the First Boer War for amother of the better books, Last Stand at Majuba Hill. During my holiday last month I read his most recent, The Guns of El Kebir which deals with the British invasion of Egypt in 1882, very much a precursor to the Sudan conflict and involving many of the same leaders (Wolseley and Graham) and units.
Now I notice that his next novel, due in January, will feature the Sudan War. Entitled The Siege of Khartoum it will take "Simon Fonthill, one time subaltern and ex-Captain in the North West Frontier's Royal Corps of Guides, together with 352 Jenkins, ex-batman and servantto Khartoum. They're on an urgent mission from Sir Garnet Wolseley to reach General Gordon, England's hero, who is being besieged by followers of Mahdi, the infamous religious leader who has declared a jihad against Egyptian authority in the Sudan. Their journey on camel-back through the Sudanese desert is treacherous. When they finally reach the General, an unexpected attack makes them realise that they have little time to make contact with Wolseley, who can dispatch troops to rescue General Gordon. As they leave in darkness to cross the Nile, they're set upon by a brutal Dervish patrol. Can Simon and Jenkins survive a Dervish interrogation and make it back to the General before Khartoum falls from British hands?"
I can't wait! There are very few novels about the first Sudan War (in fact I can only think of Wilbur Smith's The Triumph of the Sun) so this will be a very welcome addition. All of Wilcox's books are full of wargaming possibilities, whether big battles or skirmishes. It will be interesting to see if he covers any of the big battles, such as El Teb or Tamai as well (ideally another book covering the period up to Ginnis would be welcome!)
Posted by legatus hedlius at 3:42 PM 5 comments:

Labels: books
Newer Posts Older Posts Home
Subscribe to: Posts (Atom)
A record of the building of British, Egyptian and Mahdist Armies from the war of 1883 to 1885 using 28mm figures.