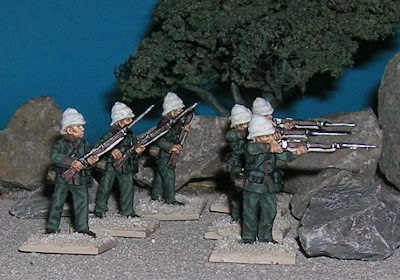 I finished half a dozen of these today. They are the first Sudan figures I have completed for nearly two months. Now they are done I am glad I went for the green jackets as they look different. I used to have an Osprey on the Zulu war which had a picture of the 1879 KRRC uniform in it but I sold it on eBay earlier in the year so I based the uniform on a cigarette card illustration of the uniform of the 1880's.
THE KRRC had 610 men in the 1st Brigade, under Buller, so, at my 1:33 scale, that would make 18 figures, one of the bigger British units. This batch includes a sergeant and the the next group, which is under way, includes a bugler. TSATF rules make no use of musicians but the Perry figures are too good to ignore.
The unit which fought in the Sudan was the 3rd Battalion which had been moved from South Africa to Malta. It was from here that it was called up to fight in Egypt in 1882. In South Africa during the Zulu War it saw action at Ginghilovo, Hlobane (where Buller won his VC), Kambula and Ulundi (where it was also under the overall command of Garnet Wolseley). It stayed on in Africa for the 1st Boer War, now under the command of its CO in the later Egyptian and Sudan campaigns, Lt Col Cromer Ashburnham. It was engaged at Laing's Nek, Ingogo and Majuba Hill. 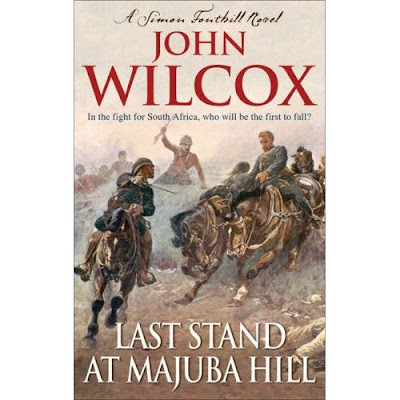 I think the green works very well - glad you didn't go for the grey!

I agree the green looks much better than yet more grey. I guess we should make the most of what colour we can get in this period :o)