Green or Grey?: The King's Royal Rifle Corps in the Sudan

The reason that I haven't painted anything for the Sudan for a bit is that I had intended that my next British Unit, after the Naval Brigade, would be the King's Royal Rifle Corps (formerly the 60th foot: the Royal Americans of Napoleonic wars fame). However, I have run into a problem as regards their uniform.

The recent Perry uniform guide in Wargames Illustrated showed them as wearing the same grey uniform as the other troops, except with their usual black leather equipment. I started to paint the 18 figures I needed in this way. Then I picked up the Mahdist Wars Source Book from TVAG and there it said "Marling mentions that while in Egypt after Tel-el Kebir the 60th rifles wore green serge jackets". Then it mentions a print of the Battle of El Teb at the Royal Engineers Museum at Chatham which shows them wearing green jackets with red collars, Black trousers and white helmets. The Donald Featherstone Osprey, Khartoum 1885 says the same thing.

Now "Marling" is Lieutenant (later, Colonel Sir) Percy Scrope Marling VC of the KRRC who served with the mounted infantry (why don't the Perries make a mounted infantry pack?), won his VC at Tamai and published his memoirs Rifleman and Hussar (London: John Murray, 1931). 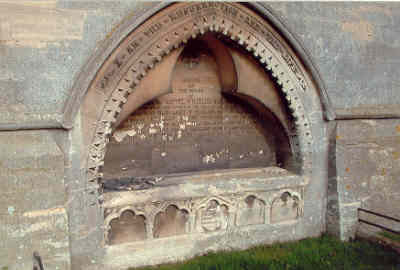 Now my thinking has gone as follows: both the Osprey and the Savage and Soldier article reprinted in the Mahdist Source book are fairly old items (around ten years). Also, the uniforms worn in Egypt in 1882 were different from those worn in 1884 (line troops wore red in the Egyptian campaign, for example). If new uniforms were going to be issued specifically for this campaign then surely they would have been issued to everyone? I would also have thought that the Perries research would have been more up to date.

Yet, there is a quote that says that when the KRRC arrived in Suakin from Egypt they wore "stained and tattered fighting kits" which indicates that they were not, in fact wearing the new uniforms (introduced in January 1884).

So, on balance, given the existence of the coloured print in Chatham (I am going to try to get hold of a reproduction of the print from the Royal Engineers Museum) which, interestingly shows all the other troops, accurately, with grey coats (as opposed to most contemporary paintings which show the red home service uniforms in a bit of artistic licence) then I think I will go for the dark green uniform. 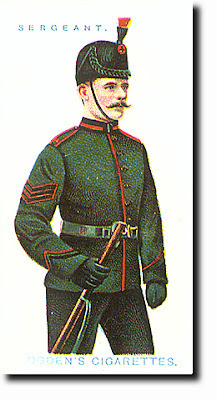 The black, rather than green, trousers are, again, a bit of an oddity. Whilst during the Napoleonic Wars the 60th foot wore grey trousers (as opposed to the 95th's green) I can see no evidence that their trousers would have been a different colour from their jackets and indeed, later photographs of the KRRC in the Boer War show them wearing jackets and trousers of the same colour (even though it is well know that the green of their jackets was so dark as to almost look black).

The white helmet is odd but not unknown (the Royal Marines had white helmets in the Sudan) although earlier in the Zulu War the Rifles helmets were dyed khaki (with tea, usually). 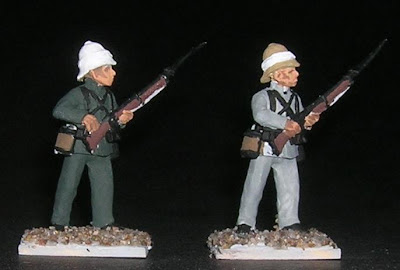 I think the final decision was made for me this evening when I painted up the base colour of one of my riflemen as green. He just looks better! Of course it will be a fiddle painting the other five figures green when I have already done their black belts but the rest will just need a quick coat over the top.

Maybe now I will actually get going again. 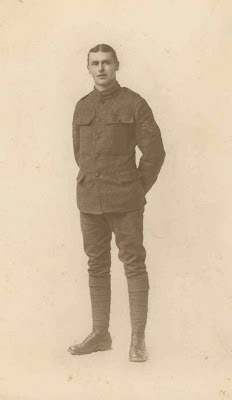 Finally, here is my grandfather, Hadden Perceval Bowen Harris, in his King's Royal Rifle Corps uniform thirty years later. He soon got bored with all that infantry rubbish and joined the Royal Flying Corps where he learned to fly and ended up working for AVRO, after the war.

Posted by legatus hedlius at 9:14 PM

..bravo, sir! When push comes to shove, it's your army, you paint the units, and as long as you're happy, what does anyone else’s opinion matter?! Paint them green I say, your research has been good.. Amongst my armies, they'd be in good company with the Welch Fusiliers wearing bearskins in the AWI (tentative at best), and in the same period, the Royal Sussex regiment fighting in the Yorktown campaign (clearly barking mad, when actually they were in the Caribbean at the time!)

I totally agree. You will be sick of grey by the end of this period.

Years ago when painting some Foundry Darkest Africa stuff I put one of the adventurers in a dark green jacket, on the basis that he was an officer in the KRRC taking time off to hunt some game or discover a lost civilisation and was sufficiently proud of his unit to wear regimentals in the African bush!

I've just come across your blog and have found it very usful indeed. I've just finished painting my first figures for this period and you blog has inspired me on. Keep up the good work! :o)

As a uniform collector, I found your post most interesting. I am in the process of trying to identify an 1883 dated KRRC officer's uniform that is in fact pale grey/khaki serge, without the usual frogging and lace on the front. Perhaps this is the missing link? It is named, and has the matching trousers as well. The collar an sleeve facings are red with black lace, as is the striping on the leg. it is possible that it is a volunteer uniform, but again, I have never seen a KRRC officers uniform without frogs and lace. However, I can image this lighter weight kit being used in the desert of Egypt. Any comments would be appreciated.