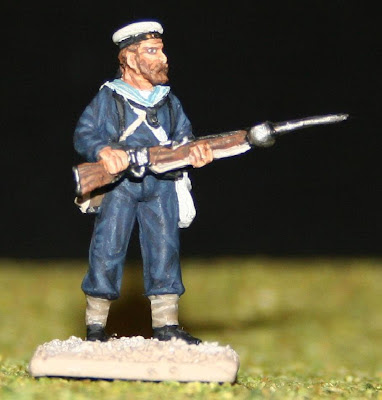 Here is the first sailor, looking very much like he has come off a Players cigarette tin. I am quite happy with him and will work on the rest of the unit now. I have decided to keep it at 14 men, and even that is a bit high proportion-wise, but much less and they won't be a viable unit I think. In the pictures below I hadn't painted the brass end of his scabbard yet. This is now done! 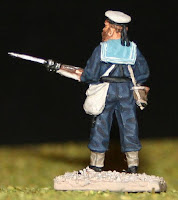 My order arrived from Perry Miniatures (with one wrong code-as usual. This is the second time it's happened). The Gatling gun is great and I will do that in combination with the rest of the sailors. I won't order the Royal Marines until after I have done the KRRC (and some more Beja!).

Here is the whole unit as it is now. In reality there were only 150 sailors in the Naval brigade which means I should only have about 6 figures. But I want 4 figures to guard each gun plus officers. I also need to be able to field a bigger unit for non-historical battles.
I probably won't get any more done on them this week as I have to finish the Greeks for Saturday.
Posted by legatus hedlius at 10:14 PM

He looks really good - I particularly like the shading on the blue uniform. Excellent face too!