I'm painting a big batch (over 40) Beja at the moment for our game next month. Many of these carry swords and the Mahdists often used to organise their swordsmen into units (more on this shortly).
The characteristic sword of the Beja, as accurately modelled by the Perries, is known as the kaskara. Superficially it looks like a typical 11th century Northern European Dark Ages sword and for some years (particularly during Victorian times) writers thought that it really was modelled on the original Crusader swords or even that some of them were surviving swords passed down for 900 years. Today it is known that they first originated in the 15th or 16th Century so are very unlikely to have been modelled on a sword from 500 years earlier. They are much more likely to be based on medieval Arab swords and there may be some Turkish influence.
It is true, however, that many of the blades were made in Europe: primarily Solingen, Germany; Toledo, Spain; and Belluno, Italy. They were then shipped to the ports of Tunis, Tripoli, Alexandria, and the Moroccan coast to be traded. Some blades were produced locally as were the scabbards and grips.
The blades vary from about 24” to 36” in length with most coming in at the longer length. The edges are parallel (although sometimes there is a slight taper) leading to a spatulate tip. The blades can be flat or have a fuller running down part of it. The sides of the blade are relatively blunt as they were generally used for thrusting rather than slashing (although some of the Perry figures are shown in a slashing pose).

Abstract patterns on the blade
Some blades were etched with inscriptions from the Koran but others contain abstract talismanic patterns. Such inscriptions were meant to impart spiritual power to the weapon (like Warhammer Runes!) and inspire the warrior to fight valiantly for Allah.
The swords have a simple crossguard and most have a languet, a short central extension towards the blade that fits over the scabbard when sheathed. Interestingly, whilst the Perry figures accurately show these on the sheathed swords they do not appear on the models with unsheathed blades. The cross-guards could be iron or brass. 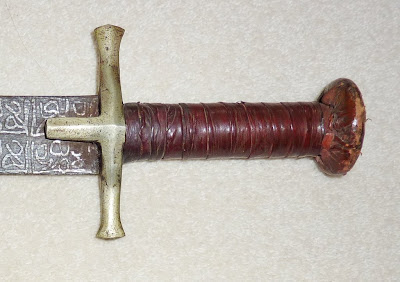 As the blades were comparatively light compared with European swords the pommel didn’t have to act as a counterweight and so Kaskara swords are a flat disk made of wood and, like the grip (usually of round cross-section), are covered in leather strips. More expensive versions would have silver or gold decoration.
The scabbards are characteristically made of red-brown leather although sometimes more exotic skins like crocodile or monitor lizard were used. The leaf-shaped distal flaring is also typical. More high status examples would have a metal chape (scabbard tip).

The swords were carried on a long leather strap that went over the shoulder and attached to the scabbard in two places. using metal rings.
The Kaskara, a was a prized possession, and was carried whenever the owner was outside his home. Many Beja continue to carry them to this day. The Sudanese were relatively late to firearms compared with neighbouring African countries. This may either be because they didn’t have the technical expertise to maintain them or there was a theory that Sudanese warriors disdained firearms on moral grounds with guns for mercenaries and slave soldiers only. By the time of the Mahdist revolt however they were well armed with around of a third of troops armed with firearms.
Posted by legatus hedlius at 9:49 AM

What a useful post - many thanks. I'd never seen one of these before, although bizarrely I've been painting my scabbards with the Foundry "terracotta" palette paints, which seems pretty accurate (if a little light).