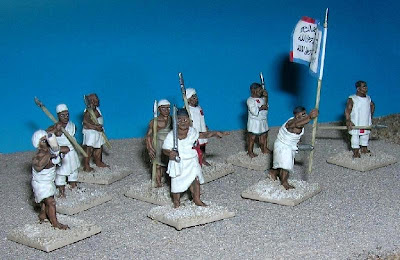 I haven't posted anything for a while but that doesn't mean I haven't been painting anything!

Here are my first Nile Arabs; a box of standing troops plus half a command set. I don't really need them for the first couple of battles I am looking at as they were Beja only forces but will need some for the future. In this early period the patches on the clothing were small and by no means universal.

It may just be me but they seemed a bit more solid than the Beja, with fatter legs. I'm not going mad on painting these to a high standard as I just have too many to do. 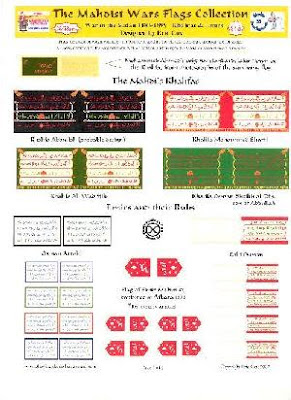 The flag is from the new ones made by The Virtual Armchair General and designed by Eric Cox and these were well worth getting.
http://www.thevirtualarmchairgeneral.com/
They are a mixture of historical flags (most from the later Sudan conflict, actually) and a number of speculative but historically informed ones. They come in sets of four smaller flags and then a larger flag for the Emir. (I ordered the complete collection and there are well over 150 scale flags - enough for even the biggest army (plus a sheet for the Egyptian Army which will also be useful). They come printed on thin but strong paper and are quite splendid. The dimensions are historically accurate and make me realise that the flags I have done for my two completed units of Beja are too large so I will have to replace them with the smaller ones.

The Sword and the Flame Rules do not make any allowance for standards but these were pretty defining features of Mahdist armies. I want each Emir to have a standard so I am contemplating doing something I never do and making a multiple figure command base of an Emir, a Standard bearer and maybe even another figure on foot. With the camel mounted Beja this will need to be a pretty hefty base!
Posted by legatus hedlius at 8:40 PM

....I love big flags, it's especially notable on my AWI figures. If they look to to you, I'd leave them! :o) Have you seen the Mhadist flags on Warflag.com??

I agree, flags rock. I think a command base with the Emir and a flag or two, perhaps also a drummer would look very good - very Peter Gilder.

In fact, largely due to recommendation here I have myself ordered the TSATF flags set. Buying the new Egyptain/Sudanese set means that I have an excuse to paint up some infantry....