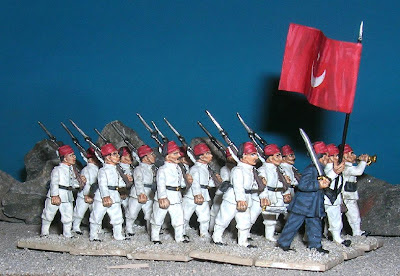 I have finished the Egyptians I bought on eBay the other month. They are going to represent the Cairo Gendarme Battalion which formed part of Sir Valentine Baker's 1st Brigade at first El Teb on February 4th 1884. No doubt they will be used as other Egyptian units as I need them too!
At this time Egyptian forces (the Gendarmes dressed in the same uniforms as the regulars) still wore white with the officers wearing blue. By 1885 the Egyptians were wearing khaki and puttees rather than gaiters.

The Turkish (which was the flag of Egypt at the time) flag is a slightly tarted up version of one of The Virtual Armchair General's from the Mahdist Wars Flags Collection.

I need to paint about another thirty of these to finish the Ist Brigade. They are pretty quick to do, though.
Posted by legatus hedlius at 11:10 PM

..that aside - what a lovely paint job on the Egyptians, the faces in particular are very nicely done...

Very nice indeed, what colours do you use for the skin tone-its far better than I can achieve?